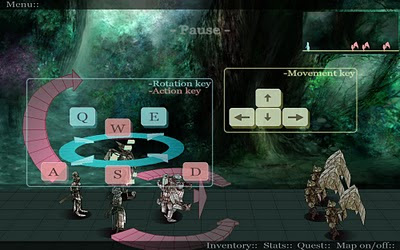 The above visual mockup battle system design is influence from Valkyrie profile, thus a tribute to the name.

With that being said, here are the below functionality::

-Single player will take control of up to 4 party member in a real time hack & slash pace.
-Each playable character can be rotate to front, side and/or back position to take control their unique active/passive actions.
-Up to all 4 playable character in the party will move in unison direction; rotating specific character to front position would increase and/or decrease party movement speed.
-A cool down system would be use to provide player with a strategy advantage to timely active each character's position skill.
-Player can customize up to any 4 playable character when not active in mission map; thus offering the player a huge replay and customization value.
- introductions of more playable characters can very much be possible with this system.

Rogue::
Front- passive: increase party movement speed, active: counter attack + dot stab to front target
Side- active: steal/rush up to the target and attempts to steal from the front target.
Back- active: Archery rain/multiple arrows are fire for a duration.

| Be Inspired, be perspired! |